There is a cycling and hiking route for everyone in the varied landscape of the Upper Swabia-Allgäu holiday region. A special highlight— the Upper Swabian ‘Jakobusweg’
(The Way of St. James), as it follows in the footsteps of medieval Jacobean pilgrims.

The Upper Swabia-Allgäu holiday region stretches from the highest point in Baden-Württemberg, the ‘Schwarze Grat’ mountain (1,118 meters) near Isny im Allgäu, through the drumlin landscape of Baden-Württemberg’s part of the Allgäu region and the moorlands surrounding the spa towns and therapeutic baths, to the floodplains along the Danube. There is a cycling and hiking route for everyone in the varied landscape. Most of the bike tours in Upper Swabia lead you along cycle paths and forest paths on roads with little traffic. The slightly hilly landscape is also perfect for hikes and walks. One special highlight is the Upper Swabian ‘Jakobusweg’, which follows a historically documented path in the footsteps of the medieval pilgrims along the Way of St James. You can explore the holiday region from a completely different perspective on a canoe tour on the Danube, the Schussen or the Iller.

LANDMARKS AND RICH NATURAL HERITAGE:
A LAND OF DRUMLINS, LAKES AND PONDS

A lot of Upper Swabia as we know it today is the legacy of the ice ages. Four separate times, the area was buried under thick glacial ice for a long period of time. When the ice finally retreated for the last time around 11,500 years ago, the Alpine glaciers left gentle, rolling terrain behind them. The terminal moraines that formed at the foot of the glacier now make up the ridges of the mountain, which are generally wooded. Upper Swabia is also the land of lakes and ponds. With lots on offer at nature conservation centres, you are able to experience the natural landscape up close and learn a lot of interesting facts. The Bussen, a place of pilgrimage and tourist destination, is a regional landmark that stands 767 meters tall and is considered to be ‘the holy mountain of Upper Swabia’. It dominates the landscape in a striking way, and the white ‘Bussenkirche’ church can be seen from afar. The ascent is rewarded with a panoramic view of Lake Constance and the Alps.

CYCLING IN UPPER SWABIA: NATURE AND CULTURE
BETWEEN THE DANUBE AND LAKE CONSTANCE

The unique natural diversity of the Upper Swabia-Allgäu holiday region can be explored by bike tour on two cycle routes that have been classified as ‘quality cycling routes’ by the ADFC. The Danube-Lake Constance Cycle Route spans 156 kilometres by bike and goes from Ulm to Kressbronn on the shores of Lake Constance. The Upper Swabia-Allgäu Cycle Route, a circular route of 365 kilometres, guides you through a gentlly rolling landscape and impresses with variety when it comes to the route itself — past sights on the Upper Swabian Baroque Route, thermal baths and nature reserves, there’s lots to explore along the way. Cyclists are also rewarded with fantastic views, and there are numerous rest stops along both routes. 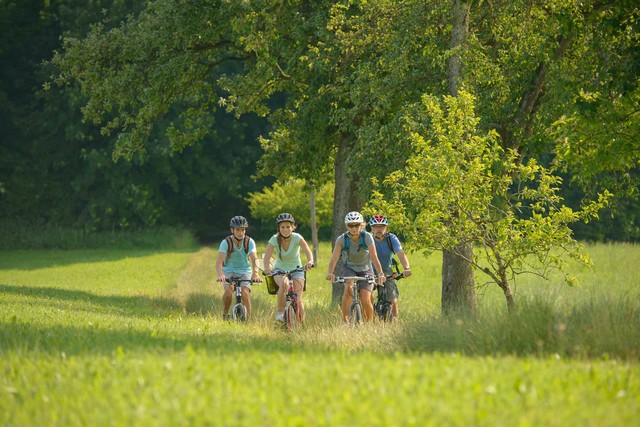